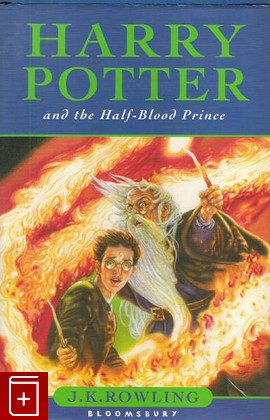 Grade 5 Up–It's no surprise that everyone's favorite teen wizard is still battling Voldemort. What does perplex the young hero is a forgotten textbook with secret writing that brings together Harry Potter and the Half-Blood Prince (Scholastic, 2005). J. K. Rowling returns Harry, Hermione, and Ron to Hogworts amidst troubling signs that the Dark Lord and the Deatheaters are gaining strength. Fortunately, Headmaster Dumbledore is helping his apt pupil prepare for an expected showdown by taking Harry to remembered incidents in the life of his old enemy. Less dangerous, but still disturbing, Ron and Hermione have put Harry in the middle of their incessant bickering. Then there's Slytherin Prefect Draco Malfoy who's under orders to commit murder–but who is his intended victim? Finally, Professor Snape is now teaching the Defense of the Dark Arts class, but he appears to be doing some dark deeds of his own. A blossoming relationship with Ginny Weasley is a bright spot for Harry, but another personal loss forces him to make some grave decisions by the novel's end. Narrator Jim Dale is completely at home with all his familiar characters and just as adept at creating new vocal personas for returned faculty such as Potions Master Slughorn. Experienced Harry Potter listeners will recognize Snape's haughty hiss and Dumbledore's smooth heartiness before the text identifies them. Even house elves Dobby and Kreacher are unmistakable during their brief appearances. Every library will need this audiobook, but it would be wise to buy two copies since they'll be zooming off the shelves faster than a broomstick.