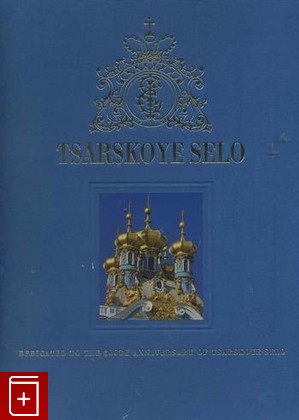 Стильно оформленный подарочный альбом в оригинальном футляре с золотым тиснением. Книга с трехсторонним золотым обрезом и шелковым ляссе.The palaces and parks of Tsarskoye Selo (named Detskoye Selo from 1918 and Pushkin from 1937) attract the attention of all those who want to plunge into Russian history and imagine the atmosphere of the past centuries. Tsarskoye Selo differs from other suburban imperial residences by its regal harmony and luxurious glitter. Ages and centuries seem to melt in its azure-golden air and get motionless under clouds over mirror-like ponds in the green frame of man-made parks. An insuperable feeling of triumphant eternity grasps you at Tsarskoye Selo. Its past appears before you like a magic fairy-tale created on a desolate marshy territory by architects, gardeners, artists, sculptors and builders as a demonstration of the superb accomplishments of the Russian state. This magnificent complex of architectural structures and gardens was being created in the course of the eighteenth and nineteenth centuries. Formed within the precepts of general European traditions, the imagery of Tsarskoye Selo monuments absorbed the best achievements of the Russian artistic school. The focal point of the Tsarskoye Selo ensemble is the Catherine Palace. The royal residence received this name, like the park surrounding it, in 1910, when the bicentenary of the town was celebrated.
This imperial residence became one of favourite places for spending summertime with the Russian monarchs from Peter the Great to Nicholas II. Undoubtedly the individual characters of the regal owners of Tsarskoye Selo, as well as various political events occurring during their reign, influenced the destiny of its artistic heritage. The ensemble was largely formed in the reign of Elizabeth, Peter's daughter, when the country celebrated the victories of our troops at Gross-Egersdorf and Kun-ersdorf and the capture of Berlin. That is why the halls and rooms of the Catherine Palace and park pavilions built by Francesco Bartolomeo Rastrelli for the Empress reflected Russia's military success in the Seven Years' War (1756-61).
The reign of Catherine the Great saw the establishment of a tradition to celebrate victories of the Russian army by installing large-scale monuments in the park. The defeat of the Turkish Fleet at Chesme, the break-through of the Russian army in the Crimea and its liberation from Turkey served as reasons for building the Chesme and Morea Columns, the Kagul Obelisk and the Ruin Folly.